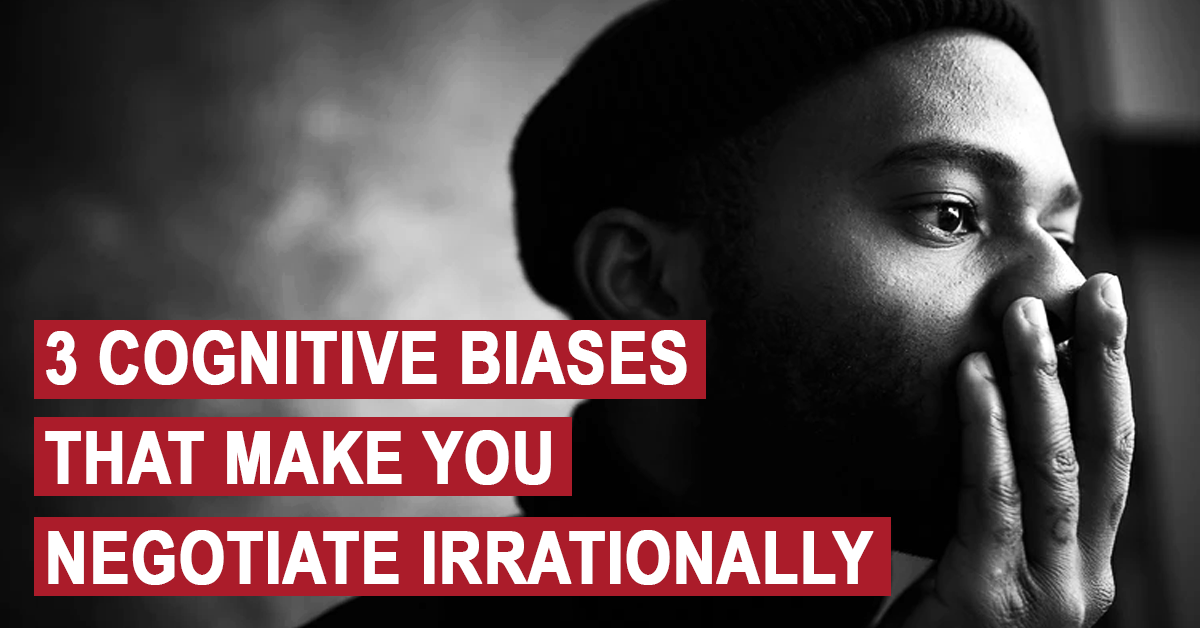 We humans are irrational decision-makers but in a predictable way. Cognitive biases are the equivalent of funhouse mirrors; they distort your perception of reality.

For example, I often ask students to rank themselves in the class in terms of IQ. Invariably, more than half of them believe they are part of the top 25% in the class. Social psychologists call this distortion illusory superiority; we tend to think of ourselves as better than others.

All the biases that distort our judgment have a function. Our superiority bias, for example, acts as our own cheerleader that gives us the confidence to take risks. The issue is that cognitive biases also come with a variety of detrimental effects.

This week, I will discuss three cognitive biases that distort your perceptions during negotiations, with tips on how to overcome them.

We humans like to make sense of the world around us. It’s not enough to see how people behave; we want to know why they behave that way. Said differently, we attribute causes to consequences.

Sounds easy enough? Not so much.

When we think about ourselves, we know why we do things and we know what contextual factors make us behave a certain way. Imagine that you lose your cool during a negotiation. You know that you are not an inherently angry person; you probably just had a very stressful day.

When we think about others, we have no way of knowing (for certain) what they’re thinking, and we often know very little about their unique situation. You could have a negotiation counterpart caring for a sick spouse and you would not even know it.

We don’t think about the countless possibilities of situations that make other people do what they do. It would take too much time. Instead, we just assume that the way people behave reflects who they are.

When we see another negotiator lose their cool, for example, we are more likely to believe that it’s just who they are: an angry person. We don’t attribute their behavior to them being exhausted by caring for their sick spouse because we don’t have that information available.

The first step to overcome this bias is to be conscious that attributions are just hypotheses. You’ll never know for sure if your attributions are correct, so take them with a grain of salt. Give your counterparts the benefit of the doubt before you rush to definitive judgments.

We live odd lives. On the one hand, we each have our own goals to reach. On the other hand, we can’t reach our goals without the help of others. Imagine that you want to buy a house, for example. The only way to do that is via a negotiation with a broker and an owner.

As explained above, we know an abundance of information about ourselves and very little about our counterparts. Our way of coping with a lack of information is to assume their goals. Do they care about both parties making a good deal, or are they just focused on their self-interest?

We like to see ourselves in a favorable light, but we rarely extend this privilege to others. For this reason, we tend to think of ourselves as more motivated by the group’s interest, while we often think of others as only motivated by their own self-interest.

Naïve cynicism is associated with a variety of dysfunctional behaviors in groups. For example, the more people you add to a team, the less people exert individual effort for fear of others free riding. It is the classic example of rope pulling, where the only way to have people exert 100% effort is to have them pull the rope alone.

In a negotiation, thinking that the other part is mainly motivated by their self-interest is a sure way to walk-in with a win-lose mindset. Whatever they do, you will perceive them as motivated by selfish interests and you will be less likely to explore creative options for fear of being screwed over. You can’t expand the pie if the counterparts don’t trust each other’s motives.

Here as well, the way to overcome this bias is to accept that your assumptions are not proven facts, which means they must be taken with a grain of salt. Your counterpart might be motivated by self-interest, of course, but you can’t know for sure. Triangulate information before you jump to conclusions.

We often negotiate about things that have an unclear value. When you apply for a job, for example, there would be many ways to measure your market value. You can (and should!) estimate it as best as you can, but there will always be a subjective part to it.

When we deal with unknown quantities, numbers become very sticky in our minds. We use any number we can find as a starting value (i.e., an anchor) and we make some adjustments to reflect our specific situation.

I illustrate this concept in class via a survey, where I ask students to estimate the size of the Island of Montreal. Half of the students are asked if the island is bigger or smaller than 50km2, while the other half are given 500km2 as an anchor. Then, they all enter their estimates.

Students given the lower number anchor for the size of Montreal make a smaller estimate than those who are given a high anchor. They can’t help it; the actual number is not known to them so they rely on the anchor.

People often ask me who should make the first offer in a negotiation. Knowing how sticky numbers are, it would be imprudent to let your counterpart make the first offer. For example, a recruiter has a strong interest in anchoring you on a very low number. This is a strategy that works very well against young and untrained negotiators.

Instead, prepare negotiations expecting to give your number first. This doesn’t mean you should open with a number, just that you have a number ready in your mind when the negotiation reaches that point.

If your counterpart manages to give you their number first, remember how sticky these are and mentally push that number aside. Respond by giving your own number and explain why you think your number is appropriate.

The antidote to a cognitive bias is knowledge. If you know your perceptions are biased predictably, all you need to do is factor in your own bias in your decision-making. The next step? Use other people’s biases to your advantage.